The annual party, which takes place at Maimarkthalle (try saying that after a few Steins!) in Mannheim, Germany on April 6th 2013, features a comprehensive list of techno royalty.
London's biggest dance festival, SW4 have announced Carl Cox & Armin Van Buuren will play at their 2013 event.
27
Carl Cox
Up
7
From: UK
Rising star DJ/producer of 2021: “Franky Wah. He is coming at ya!”
Carl Cox: maestro, legend, genius — he’s been called it all and that’s probably why he’s never left the Top 100 DJs list ever since it began. If our figures are right, in this year alone Coxy has remixed five tracks, featured on one single and played on three continents — not bad during a pandemic. To top it off, he began his BBC Radio 1 Residency, published his autobiography Oh Yes, Oh Yes! — which made the bestsellers list — and announced his first album in a decade. All good reasons for him to make the 2021 list.
But perhaps what’s kept Coxy at the top all these years, aside from his mastery of the craft — across all DJ formats — is the pure joy he exudes when playing, even up to this very day. Anyone who watched one of his Cabin Fever sessions online over the past year would have noticed this. It’s the kind of passion you can’t fake or maintain unless it's coming from a real place. He really does embody the spirit of the rave: peace, love, unity and respect.
How was your first gig back after lockdown?
“I’d already been playing big shows in Australia but my first gig back in the UK, to 5,000 people on Brighton Beach, was beyond amazing."
How have the last 18 months changed how you view your work/life balance?
“Probably by learning what balance was! Of course, I was working just as hard but without touring. I used to fit everything around the shows but now I can see how to let everything flow together."
What further steps should the industry take to combat climate change?
“As an industry we are on the whole mindful of the environment, but we also have a loud voice and a huge global reach and can make sure that industrialists and politicians listen to us."
What’s the best bit of tech you’ve added to your studio or DJ setup this year?
“I started to use the Pioneer DJS-1000, it’s such a powerful piece of kit, I love it.”
What’s the best album you’ve heard this year?
“London Elektricity ‘Building Better Worlds’. I just cannot stop playing it.”

Submitted by Becca Antoon on Mon, 2021-10-11 12:36
Style:
“Techno and house – played with passion.”
Best known for:
“Sharing the love of all music styles, bringing a positive energy to the dancefloor and still known as the People’s Choice.”
Tune of the year:
“Dubfire & Flug 'Rubber'.”
DJ Mag Top 100 DJs2021Carl Cox
34
Carl Cox
Up
1
If there’s one DJ who feeds off the energy of a crowd, and vice versa, it’s Coxy. He radiates good vibes whenever he plays out, so being denied live shows while locked down at his home in Melbourne, Australia, this year presented a challenge initially. It wasn’t long before he launched his Cabin Fever sessions though, dipping into his vast vinyl collection to bring a weekly Sunday dose of great music to online audiences worldwide.
Most of the curated two-hour shows were self-explanatory and fascinating — Space Terrace, House Music Divas, NYC Beats, UK Superclubs, Balearic Beats, Down 2 Funk, Disco Diggin, Chicago Dreamin, 92-95 Trance & Techno… F.A.C.T. 25 Years saw him recreating his groundbreaking ‘F.A.C.T’ mix album from a quarter of a century ago, live on vinyl; Rave White Labels 91-97 was a Russian roulette of unknown hardcore and drum & bass; while My Father’s Playlist was a tribute to his dad, who sadly passed away during lockdown. Each themed show was a shining example of a true music head at work — someone we’re all still incredibly lucky to have in our scene.
What three things have most helped you through Coronavirus Lockdown?
“Being able to play my vinyl record collection for my Cabin Fever show every week, having Zoom meetings and keeping in contact with my family and friends via social media, and cooking fresh meals again.”
What lessons should the industry learn from this crisis?
“There’s nothing to learn here, this industry is amazing if you choose to embrace it. All we have to do now is stick together in all forms of the industry and we will be back making people happy again.”
What steps need to be taken to address the racism in the dance music scene?
“All we have to do is treat everyone as equals, and understand that we are all different with different backgrounds, but the music always brings everyone together from all walks of life.”
What industry changes are you personally pushing for to make the dance music scene more inclusive?
“I am pushing for really talented live electronic performing artists, there are so many of them out there not getting a shot at the dancefloor.”
What’s the greatest dance music track of all time?
“If I had to choose one, it would be Donna Summer ‘I Feel Love’.”

“I haven’t stopped since 1988,” Coxy tells DJ Mag. “Can you imagine if I mapped out every single party I’ve ever done, the map would be riddled with pin-drops everywhere — it would be a complete rash of events that I’ve done.”

For someone who’s meant to be slowing down a bit, it still sounds like Carl has had quite a year. “Can you imagine my life? I’m trying to kick back, put my feet up and drink some pina coladas and here I am breaking up a fight on the dancefloor,” he says, referring to a recent incident at an Athens club-night. “My life is absolutely amazing in one sense, and crazy in others. But it’s all about the music at the end of the day, as far as I’m concerned.”

He has a kind of global ambassador role these days, but that’s not to say that Carl isn’t still bang up to date with all the latest techno sent personally from producer friends from around the world. Being voted the Highest Techno DJ in the poll once again is testimony to a DJ still absolutely at the top of his game. Carl talks enthusiastically about his new label Awesome Soundwave, for which he’s only signing live electronic acts. “There’s a million DJs now,” he says, “but I want people to see that in our electronic world, there are people who can actually perform live, can actually play the things you see in front of ’em. So I’ve created an outlet, a platform. I want to see more live artists — we may see the next Prodigy out there.”

Do you submit your DJ setlists to the relevant royalties collecting society?

“Neighbouring rights has started to happen, this works better for me than [Pioneer DJ] Kuvo.”

What more can we do to combat the mental health crisis in our scene?

“Keep making people aware that the job we have is fantastic, but it comes at a cost... Speak out... it helps people to understand.”

Are you personally doing anything to improve the gender balance of line-ups?

“I’ve always chosen DJs on their merits — man or woman. The time is now for female DJs to bust the door down. It’s awesome to see that times are changing.”

What changes have you made this year to be more environmentally friendly?

“Plastics has been a big thing this year, putting your rubbish in the trash is always a good thing.”

What was your favourite toy when you were a kid?

“Riding motorbikes. Having the helmet on, nobody knows who you are… you’re just a fellow biker with everyone else.”

Kappa Futur has confirmed the after parties and set times for its 2019 edition.

The legendary Turin festival announced its full line-up back in March, including the likes of Carl Cox, Nina Kraviz, Richie Hawtin, Jamie Jones, The Black Madonna, Ricardo Villalobos, and much more. Now, the festival, running on 6th and 7th July, has locked in Ge-ology for the opening party. 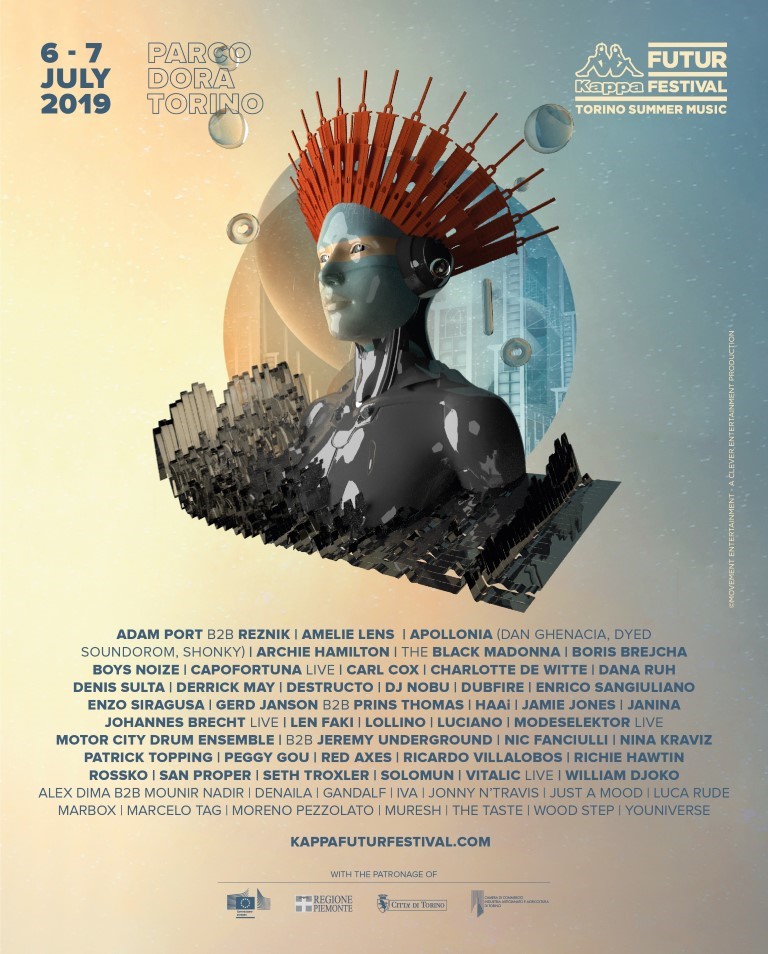 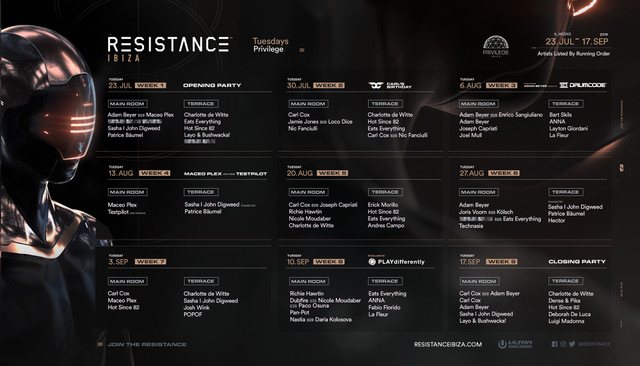 What can you say about Carl Cox? A titan of the worldwide electronic music scene, he’s a global ambassador whose effervescence and joie de vivre behind the decks is absolutely infectious.

Starting to DJ in his mid-teens, Coxy was ideally placed to become one of the UK’s acid house pioneers, his three-deck vinyl mixing wowing the raves right across the UK. By the mid-90s, with the release of his ‘F.A.C.T.’ mix on React and a slew of productions, he was already the biggest DJ in the UK — a fact borne out by his No.1 placing in 1995’s Top 100 DJs poll, and again in 1997.

Via Ultimate Base and Intec Records he cemented his position, and when he began his residency at Space Ibiza and toured his Carl Cox & Friends around various megafests, he became a globally recognised statesman for our culture. He finished his Space residency when the club closed in 2016, but is now a partner in the Space Club business as they launch into the future. “No pun intended, but watch this Space!” he grins.

Carl has also been working hard on his new label, Awesome Sound Wave, and found time to appear in the What We Started doc with Martin Garrix, with Paul Oakenfold at Stonehenge, and at assorted Resistance parties and more. Coxy is unstoppable — OHYESOHYESOHYES!

From: UK
DJ style: Infectious.
What’s the next new big track? “The next big track will be Cirez D ‘Backlash’ (Mouseville)’.”
Breakthrough DJ/producer of 2016: “Matador. Hard work and self-belief play a big part in what he has created. What a year he has had — it was so well deserved.”

We finally caught up with Carl Cox after his epic final set at Space, and while he was in transit to one of the Ultra Music Festivals. The closure of the Ibiza club is the latest chapter in an unfortunate year for electronic music, with Fabric in London also shuttering and Spanky from Phuture — as well as icons Bowie and Prince — all passing away. Cox, as ever the people’s DJ, remains upbeat about the future.
“The music will always rejuvenate itself because of new people coming into the scene with new ideas but also influenced by all the great artists and more” he says.

Aside from his Space residency, he also cites parties and festivals like “Awakenings, Tine Warp, Pure in Australia, Dream Beach in Spain and Fabric and Tobacco Docks in London” but adds that “the list is endless”.
Apart from maintaining a hectic DJ schedule, Cox also reveals some surprising plans to DJ Mag.

What have been the new frontiers for you this year?
“I am very much into my Carl Cox Motorsports. I have been putting a lot of time and effort into drag racing; side car and classic motorbike racing worldwide.”

What’s the best new bit of DJ/production technology, and why?
“I am loving the Model 1 mixer from Richie Hawtin. I can go on all day about this mixer, but I won’t – all I can say is that the analogue sound, the filters and the controller on this mixer are by far the best I have ever used.”

If you had to switch your style to another genre, what would it be?
“I love drum & bass in all its forms, but the more intelligent sound pushes all the right buttons for me.”

As a fan, what is the top price you would pay to see yourself DJ?
“As a fan it should not matter – it is what you believe you should pay that counts.”