With her new ‘Embryo’ EP on Planet Mu, Jlin’s body of work takes another step toward unifying sound and motion. DJ Mag's Bruce Tantum catches up with the busy Indiana-based composer to find out more

Early on a Sunday morning is not the usual time to be interviewing anyone involved in making and playing electronic music. Generally speaking, at that point, they’re either on the road, sleeping it off, or still at work. Yet not long after sunrise, there’s Jerrilynn Patton, better known as Jlin, on the other end of a Zoom call — awake, alert and ready to chat.

It turns out that the time slot was the only one available, as Patton has a schedule full of obligations. They’re far from the typical “gotta run to the airport for my next club gig” type of commitments, though — which is not surprising, as she’s far from your usual electronic music artist. Based in Gary, Indiana, 25 miles east of Chicago, Patton’s output tends to be structurally complex; you’d be unlikely to hear her music on your typical party-time dancefloor.

Instead, she’s just coming off a gig at Hamburg, Germany’s Elbphilharmonie, where she performed as part of the Reflektor festival, co-curated by the post-minimalist composer Max Richter. “And I have a virtual rehearsal for six hours tomorrow,” Patton says, dressed in black and sitting in what appears to be her bedroom. The rehearsal is with the Third Coast Percussion ensemble, the Grammy-winning quartet which has performed works from the likes of Philip Glass and Steve Reich, among other notables of the modern classical world. “They’re doing the final recording of the piece I wrote for them, ‘Perspective’,” she says.

Patton’s own version of one of the sections from that piece, ‘Embryo’, serves as the title track of her latest EP, which came out on December 10th via her long-time label, Planet Mu. It’s perhaps her most accomplished work yet, a dizzying quartet of labyrinthine tracks taking cues from techno, IDM and various stops along the hardcore continuum — including the style with which she initially made her name, footwork. Like much of Patton’s music, and as you’d expect from a release that’s written in part for a percussion ensemble, the EP’s sound is defined, more than anything, by rhythmic complexity.

“I’ve always loved the sound of drums, and any form of percussion,” she says. “The first drum of all time, and the best one of all time, and most important one of all time, is your heartbeat. The function of what the heartbeat does is probably one of the biggest driving forces to my music. I’m always thinking about it like, ‘your heart, your pulse, your body’. If I’m going to make a piece, I’ve got to bring it to life. It can’t just sit there, stagnant.”

‘Embryo’, like a lot of work currently hitting the shops, is a pandemic-era creation. Patton’s final live date before the world shut down was on March 8th, of 2020. “I was on the road with Third Coast Percussion,” she recalls, “and we were coming from the Boulanger Initiative [an organisation that advocates for women and gender-marginalised composers], where they had premiered ‘Perspective’. We were all excited, but we kind of knew what was coming; everything was very uncertain at the time. And so when [the lockdown] happened, everybody’s at home — and not just musically but just with everything, it all comes to a dead stop.”

As with everyone else, uncertainty, along with money worries, reigned. “I mean, nobody’s bills will stop coming, right? And so I was writing, really, just to try to not think about what was to come next, honestly.”

Patton, born in 1987, has lived in Gary her entire life, and was surrounded by music from the start.  “My parents both listened to everything, so I grew up listening to everything,” she says. “The only thing that didn’t grab me was country music. But there was R&B, folklore, hip-hop, bluegrass, and definitely a lot of jazz, because we had this radio station, WNUA 95.5. When I was in the car, it would be between that and WCGI 107.5,” the hip-hop/R&B station where the venerable radio jock Tom Joyner had a morning show.

“My palate was really heavy; it really spanned a lot,” she says. “Even now, I can jump between trap to Igor Stravinsky very easily, or I can jump between Tracy Chapman and Nina Simone to Elton John or James Blake.” But even with that wide-ranging backdrop of listening material, the world of electronic music was largely a mystery — with the exception of a singular sound emanating from nearby Chicago.

“The only thing that I was discovering at that time as far as electronic music goes, was footwork, and my first introduction to that was when I was four,” Patton says, conjuring up images of a toddler tackling the genre’s high-speed dance moves. “And that was my entire electronic music history. I didn’t know anything outside of that, not even house music. When people ask about certain artists, even if I just know who they are, a lot of times I’m kind of embarrassed, because I find myself saying no.”

It was footwork that led her to try her hand at the production arts while working a day job at one of Gary’s steel mills. She speaks of her original influences with enthusiasm. “DJ Rashad, DJ Roc, DJ Clent, RP Boo — all those pioneers are an inspiration, and out of all of them, RP Boo’s palette is the most distinct. Nobody can do it like him. But really, all of them have a different palette, and you can hear the difference between all of them, and a difference from back then to the present, and it’s really beautiful. It’s a story within itself.”

With a cracked DAW, she got to work in late 2007. “Well, you’re not a real producer until you have your first cracked DAW, are you?” she asks. “I was given FL Studio, which I use to this day. But for the first week, I couldn’t get it to make a sound. So I had to get on YouTube and ask, ‘What am I doing wrong?’ You know, YouTube university. And so I remember the first time I could make a sound, and I was like, ‘Oh, this is it’ — it was just such an exhilarating feeling. There was a lot of trial-and-error; a lot of it is still trial-and-error. Of course, I’ve grown since 2007, but there are still those moments where it’s like, ‘I know I can get this to work the way I hear it in my head, the way the flow should really go, and the way that I feel it.’” That process of experimentation, over the span of several years, allowed her sound to coalesce and mature. 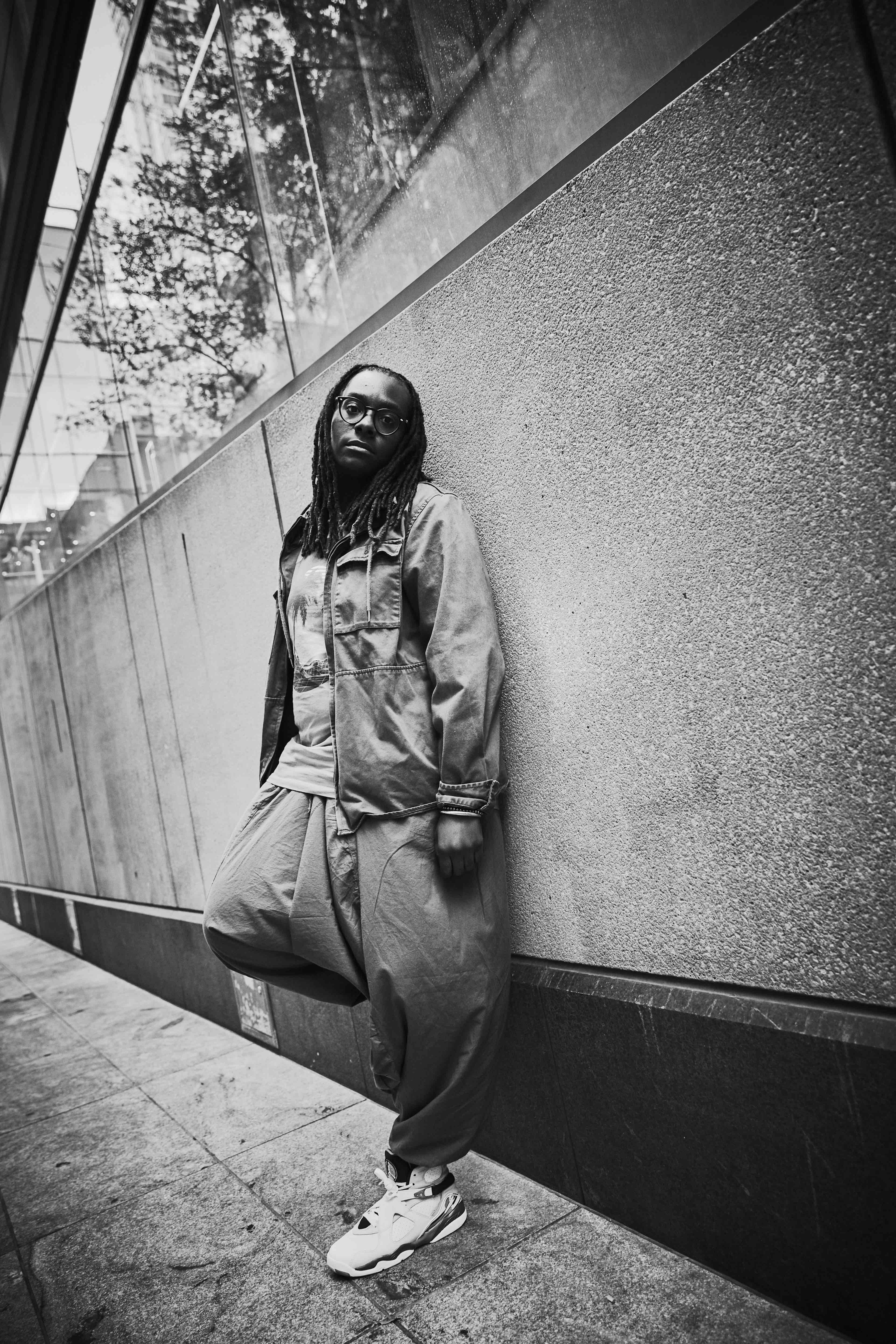 “The day that my mom and I left, I had just gotten off at midnight after a 16-hour shift. I just came home, took a shower and went to the airport. It was bizarre. And when I got there, it was jetlag on top of a 16-hour shift. It was crazy. I mean, I don’t know what shrooms feel like — but I was thinking, ‘this what it feels like to be on shrooms’. At that point, I realised life wasn’t making sense.”

She soon quit her steel-mill job. “And then my first album came out,” she recalls, referring to 2015’s ‘Dark Energy’. “It was just like, wow. I just couldn’t believe how fast things were moving.” ‘Dark Energy’ was followed by 2017’s ‘Black Origami,’ which, like its predecessor, found its way onto more than a few year-end best-of lists; a new album is in the works.

Some artists, before they sit down to write and produce, have at least a vague idea of what direction a song is going to go. Given the complexity of much of Patton’s compositions, you might think she has everything mapped out before getting to work — but in reality, she takes the opposite route.

“When I’m sitting down to create, it’s a very blank canvas,” she explains. “I don’t go in with, ‘okay this is what I’m going to do’. Every time I sit in this chair or wherever, I’m just trying to find the opening sentence — it could be the first four bars, or maybe the first two bars. Once I have that starting sentence, then I know I can finish the track.”

Despite the dynamic vitality of her music, Patton has talked about how her work comes out of darkness; she called darkness “the birthplace” in a 2016 interview. It’s a concept that she feels has been misunderstood by some.

“I think when people hear the word ‘dark’,” she explains, “they associate it with a negative connotation. But for me, ‘dark’ is not that, I think of it like starting from a piece of coal. And then it goes into a state of heavy pressure, and then it morphs. So I create from that starting coal point, and then I have what I call my practice moment — my moment of growth — and it’s going under that pressure of the growth. And then there it is, as a diamond.

“And that’s what I mean when I say I create from a dark place, a place of having to dig inside of myself,” she continues. “I’ll know that something is there, and I have to pull it out. And it’s not easy,  but I know that’s where my creativity lies, in a place that I can’t get away from. It’s very hard to get there, and it’s rare that those moments are seamless. But when it happens, you’re listening to the authentic version of myself.”

Patton’s music may be the end result of a process of personal explorations — but she’s also become known for a series of compelling collaborations. There was 2018’s collective effort between Patton, sound artist Holly Herndon, and an AI entity called Spawn, resulting in a slightly unsettling three minutes of thrums and clunks titled ‘Godmother’.

There’s also ‘Holy Child’, an ethereal, stuttering track made with William Basinski, the envelope-pushing composer best known for his groundbreaking tape-decay project, ‘The Disintegration Loops’. Patton refers to the avant-garde master as “Billy.”

“Billy’s very much like a father figure, especially when I’m on the road,” she says. “He’ll just do something as simple as giving me money to go get something to eat — not because I needed it, but more like him asking, ‘Hey, have you eaten today?’ Just stuff like that.”

And then there’s the recent ‘JSLOIPNHIE,’ an oddly soothing track full of buzzes, whirrs, plucks, and gurgles created with the late pop experimentalist SOPHIE, released on Unsound Festival’s ‘Intermission’ compilation in 2021, not long after SOPHIE passed away in a tragic accident.

Over the past several years, Patton’s made forays into the world of dance, working with the likes of renowned choreographers Kyle Abraham and Wayne McGregor. It might seem a long way from her footwork roots — but for Patton, it’s all connected.

“I’m sure my answer will change as my journey goes forward,” she says, “but where I am right now, I see sound and motion as one and the same. They’re not different for me; they’re the same exact family. It’s not ‘sound in dance’ for me — it's ‘sound and dance’. And not just dance, but all motion, from the way a woman moves her arm to the way a woman blinks her eyes. All that can be interpreted in sound.”

It’s those interpretations, those connections she makes between the realms of the physical and the transcendental, that make Jlin’s work so remarkable and so memorable.