The best dance music films of the decade | DJMag.com Skip to main content

The best dance music films of the decade

As part of DJ Mag's round-up of all the best in dance music in 2019, and in the 2010s, we decided to spotlight some of the best in film, too. Here are some of the finest documentaries and feature films about dance music from this decade: from EDM superstars and journalistic storytelling, to fantastical madness and introspective works about community, politics and resistance 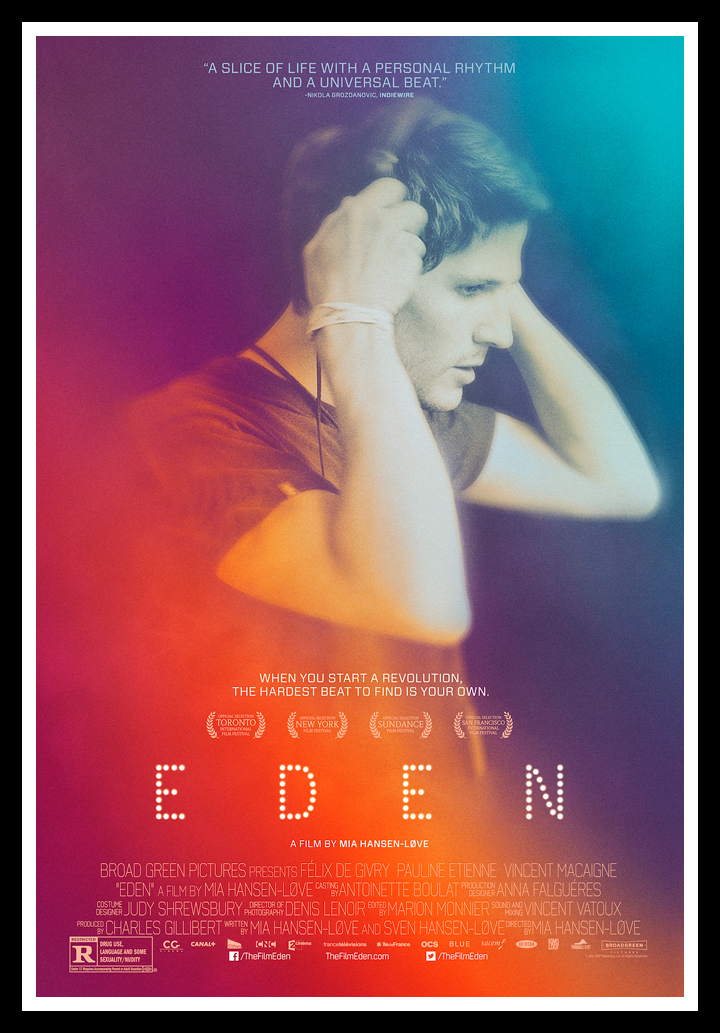 Set in Paris in the heat of the French filter house movement, a requisite Daft Punk cameo is about as glamorous as this subtle and moving drama gets. Mia Hansen Løve’s film spends its time examining the life and addictions, both narcotic and musical, of a local resident DJ. No other dance music-focused film has so successfully captured the undulating blend of ecstasy and melancholy, eschewing the usual rags-to-riches narrative in order to sympathetically explore a passionate and sometimes problematic life at the fringes of club culture. 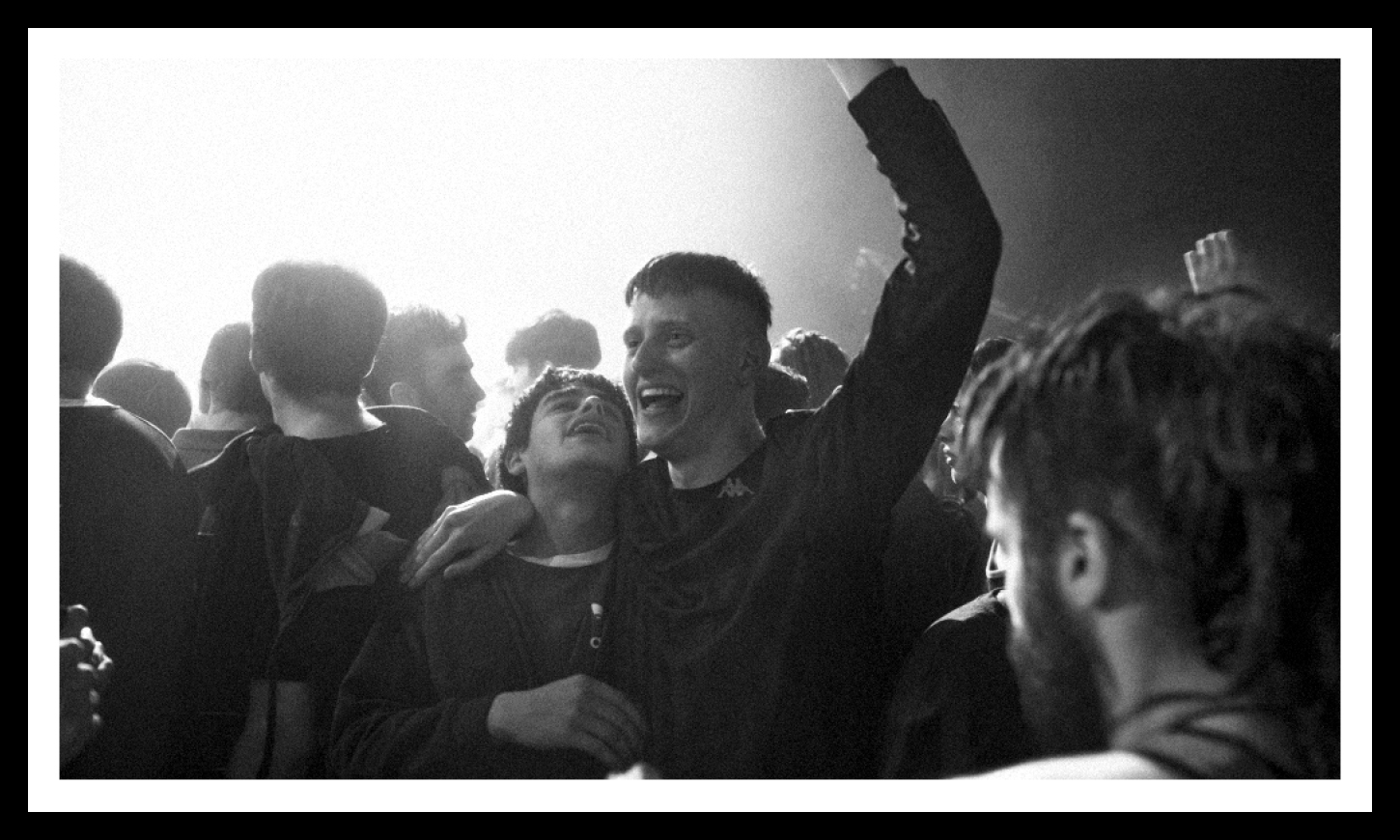 Shot in black and white and full of unknown talent, Beats is a lively slice of rave nostalgia that takes place in 1994, long after the Second Summer of Love and shortly before the arrival of the Internet. With techno as the soundtrack for a generation of disaffected young people in Scotland, and the controversial Public Order Act about to take effect, two unlikely friends from different sides of the estate are united in a love of dancing, while dodging cops and criminals and getting off their chops. A brilliant soundtrack of club classics and obscurities compiled by JD Twitch of Optimo guarantees misty eyes, or at least a scramble to Shazam. 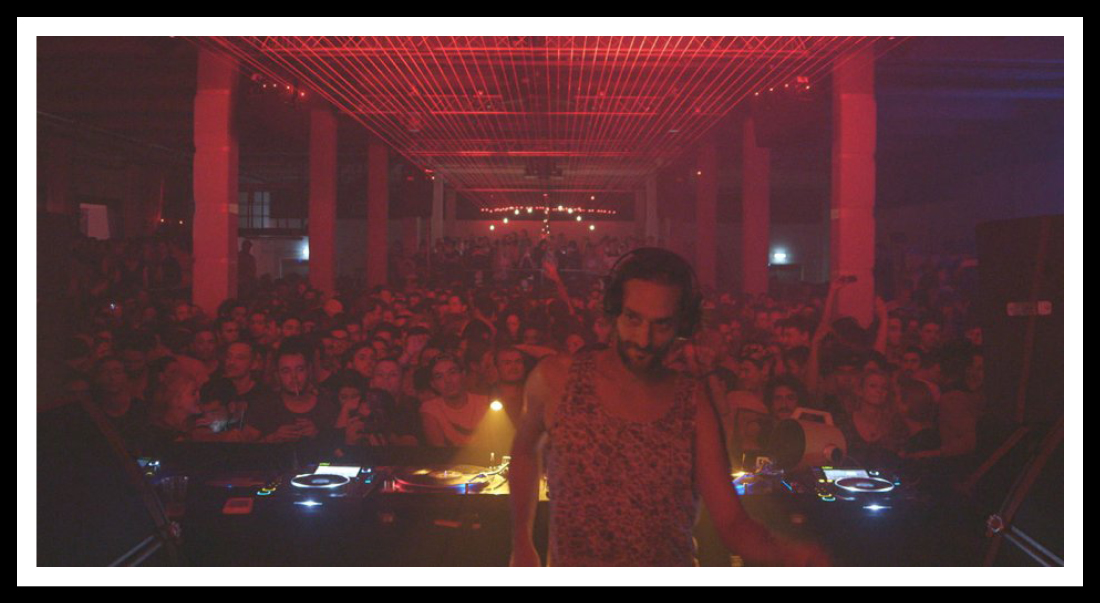 This understated documentary takes a romantic look at rave’s impact on Germany by focusing on some of the country’s beloved DJs: Roman Flugel, Sonja Moonear, Ata, Move D and the more elusive Ricardo Villalobos. Director Romuald Karmakar finds each of them in a reflective and generous mood, and while the film often struggles to capture the energy of a dancefloor, scenes here are mixed to allow the audience to listen in through the DJ’s own ‘cue’, making them for an obvious but remarkable insight. There’s also at least one moment of unexpected nail-biting tension, as Villalobos skillfully but narrowly avoids an enormous trainwreck on a festival soundsystem. 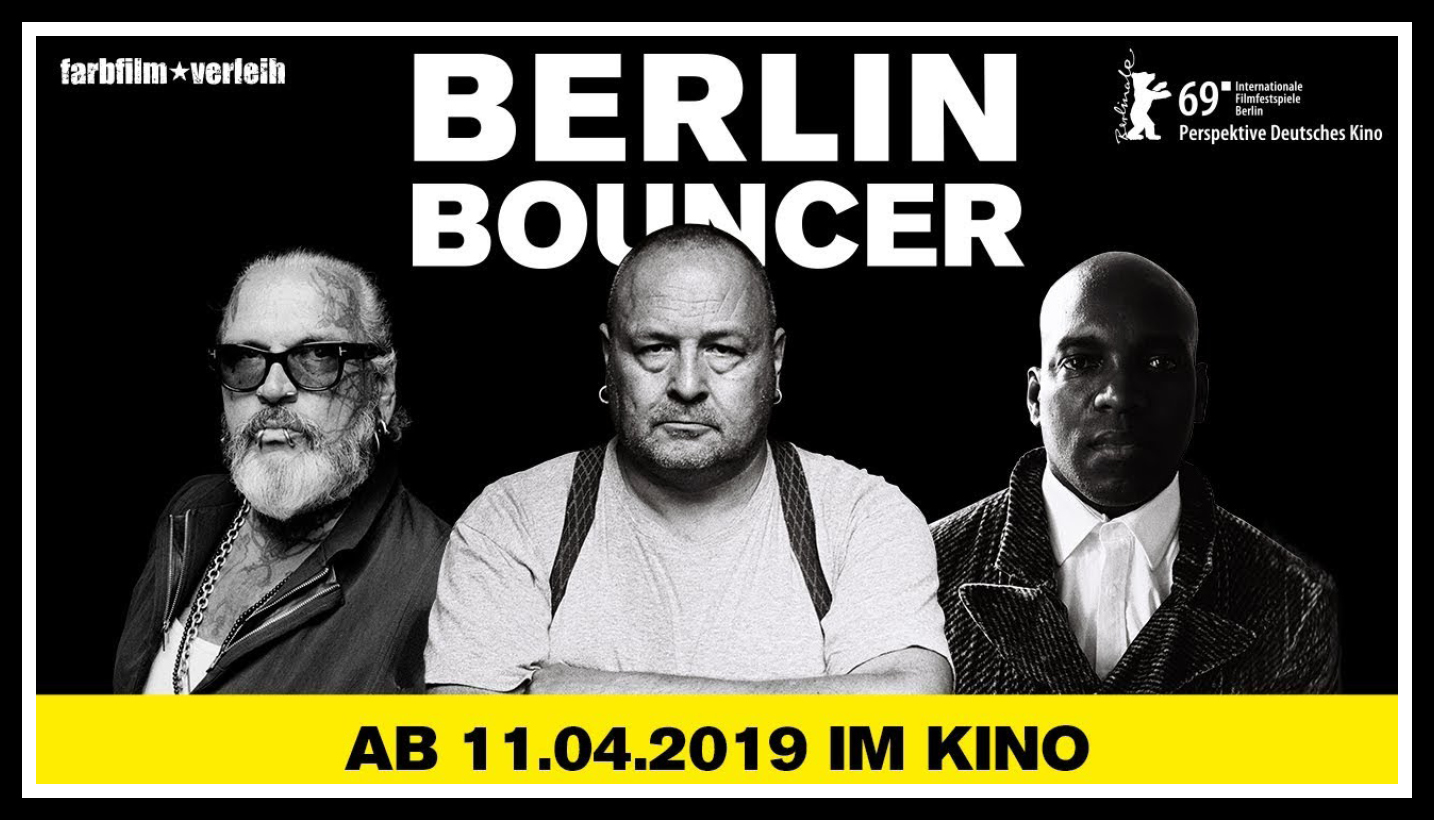 Berlin may be a clubbing paradise, but thanks to the city’s notorious door staff, much of the pleasure remains for those on the inside. Available in German only, Berlin Bouncer features the most intimidating and iconic of all; Berghain’s gatekeeper, Sven Marquardt. As expected, the cameras are kept far from the club and its patrons, focusing instead on his photography career. But Marquardt’s aspirations form a third of the story. More intriguing in that of Michael Smiley, an African-American ex-GI who arrived before the fall of the Berlin Wall and founded one of the city’s leading security agencies, and Frank Kunster, the bouncer at Funsize. The notorious Mitte bar is shuttered during the film, representing a poignant end of an era for a certain, more light-hearted side of the city’s nightlife. 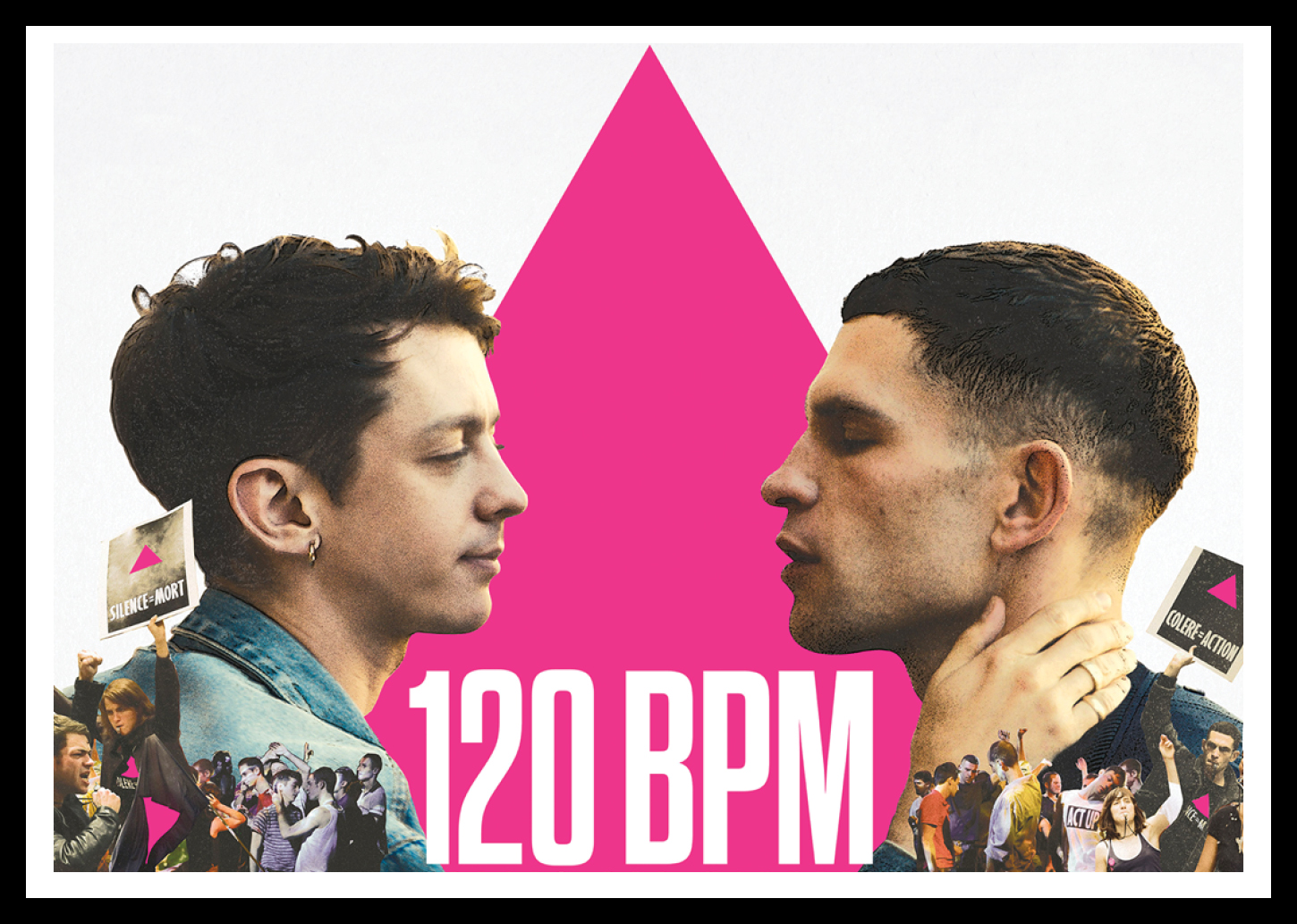 A hugely accomplished piece of queer filmmaking, 120BPM focuses on activism, conflict and unity within ACT UP, the radical movement responsible for raising awareness during the HIV epidemic in France in the 1990s. The beating heart of club culture underpins the film’s evocative soundtrack from French synth artist Arnaud Rebotini, as well as the music of house pioneers such as Frankie Knuckles, Paul Johnson and Joe Smooth. And while 120BPM has more pressing, vital issues on it’s mind than a simple paen to rave culture, it’s nonetheless a timely portrayal of the importance of clubs as a place for discussion and freedom within marginalised communities. 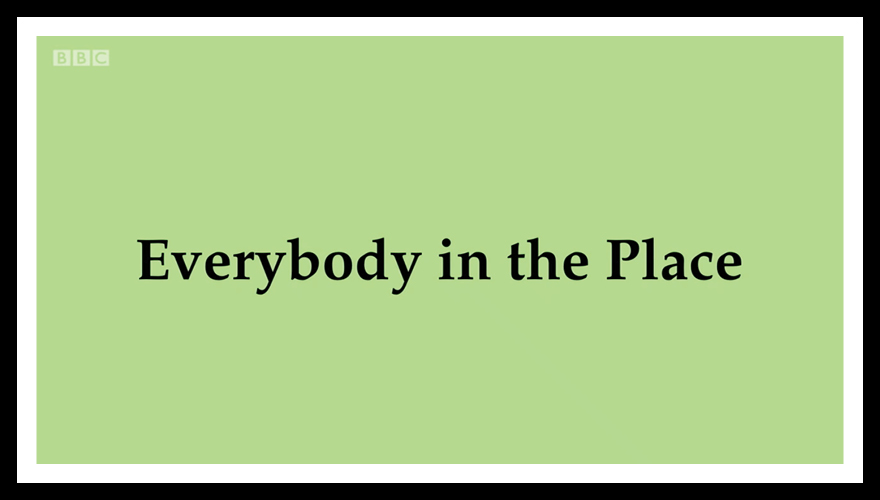 British artist and filmmaker Jeremy Deller flips the lid on typical acid house nostalgia throughout this optimistic and engaging documentary. Foregoing the usual who’s-who of veterans in front of their record collections, Deller himself presents an engaging lecture to a modern, multicultural classroom of high-school students, plotting out the musical and political history of acid house, from Chicago to Doncaster. In doing so, he uncovers swathes of heartening archive footage portraying ecstatic scenes from a very different and yet familiar United Kingdom, as well as leaving an intriguing open question as to what such a movement might look like in the social media age. 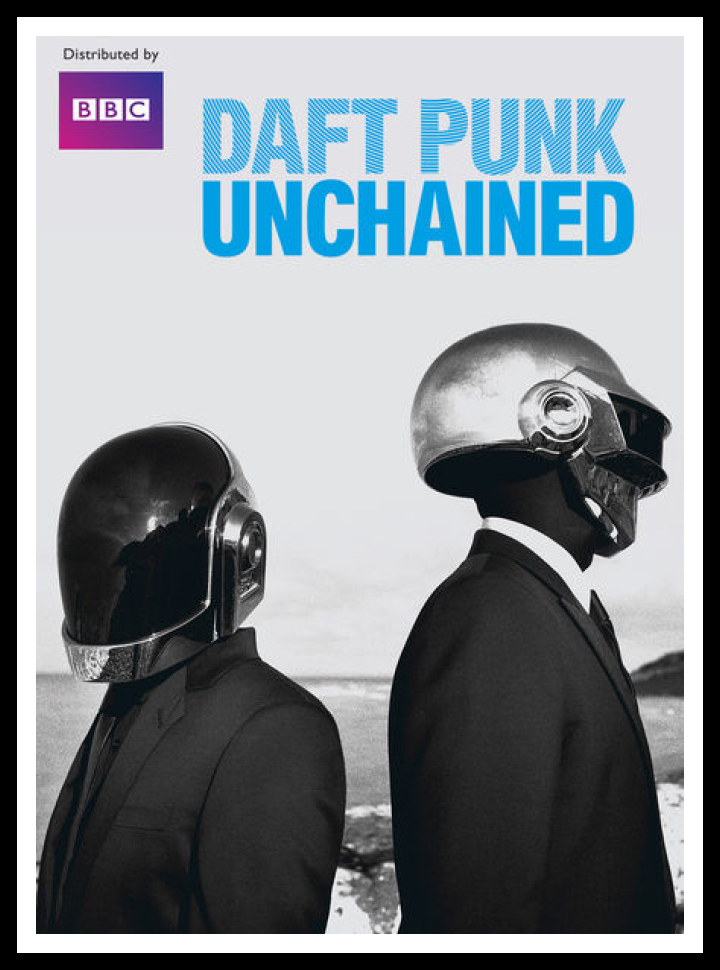 Unchained is not the only film about Daft Punk. Their self-directed 2006 feature Electroma is a beguiling and patience-testing venture that has more in common with minimal-techno than the electro and house bangers that have defined the duo. On the contrary, this much more accessible film uses the typical route of interviews with regular collaborators, obsessive celebrity fans and dusty archive footage, combined with a little behind-the-scenes access, to explore the phenomenon of how two faceless robots became among the biggest bands in the world. 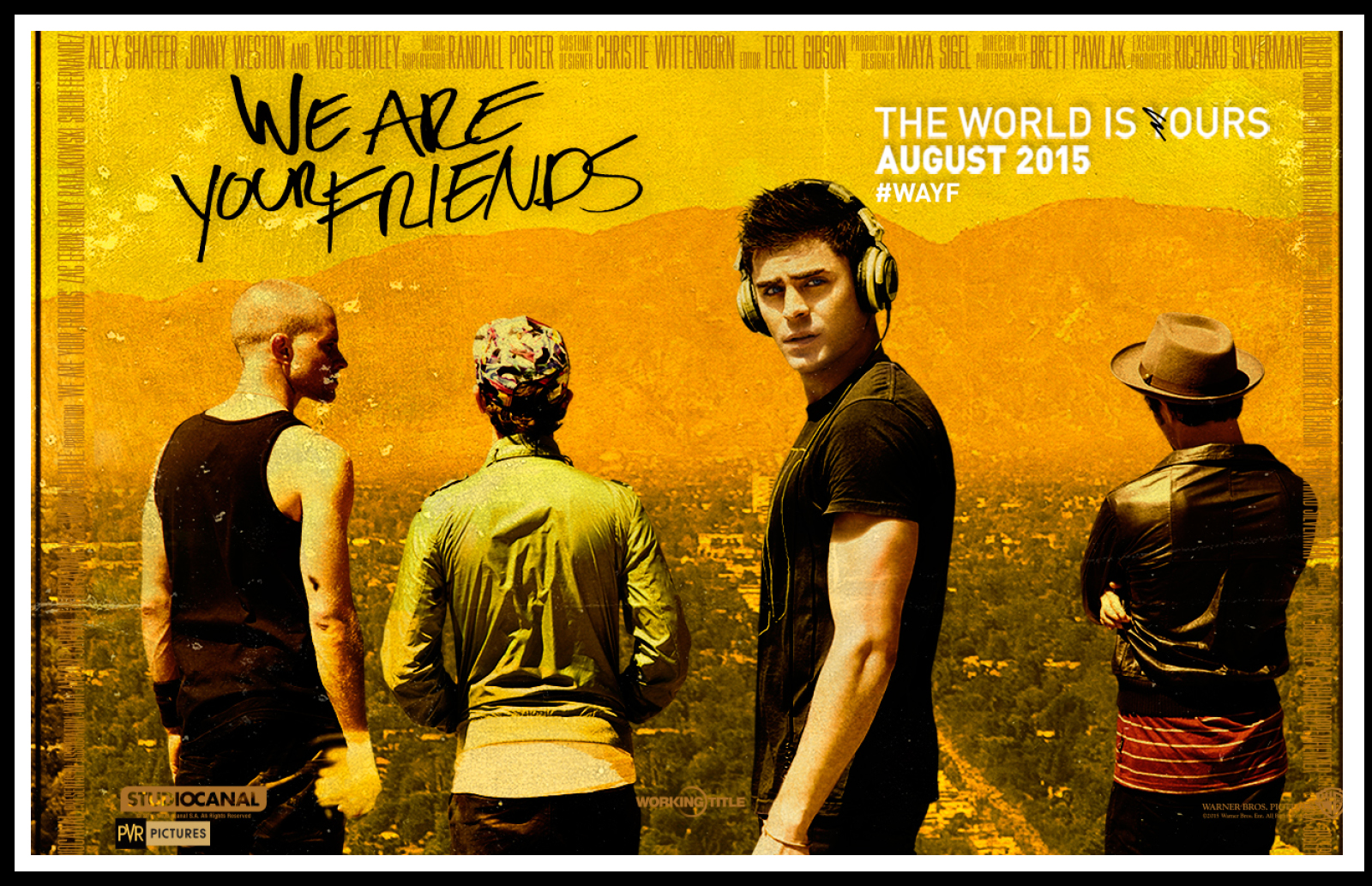 Justice v. Simian’s indie-disco anthem may have begun life as a naive competition entry, but soon had a life of its own, lasting in influence and anthemic status beyond the bloghouse era it defined and well into EDM’s dominance fart across the United States. Case in point, this 2015 romantic drama, which sees Zac Effron attempting to subvert the candy-scented legacy of High School Musical by playing an aspiring DJ, wiling away his hazy days taking psychedelics, crushing on Emily Ratajkowski and attempting to “write the track that will set the world alight.” Arguably everything good about Eden is missing from We Are Your Friends, and yet, there’s something intoxicating about the sun-bleached aesthetic. At barely five years old, the film already feels like an intriguing time capsule; a last-grab effort from a time period in which EDM was being touted as an American youth movement to equal grunge, in which Miley Cyrus’ ‘We Can’t Stop’ inadvertently plays the role of ‘Smells Like Teen Spirit’. 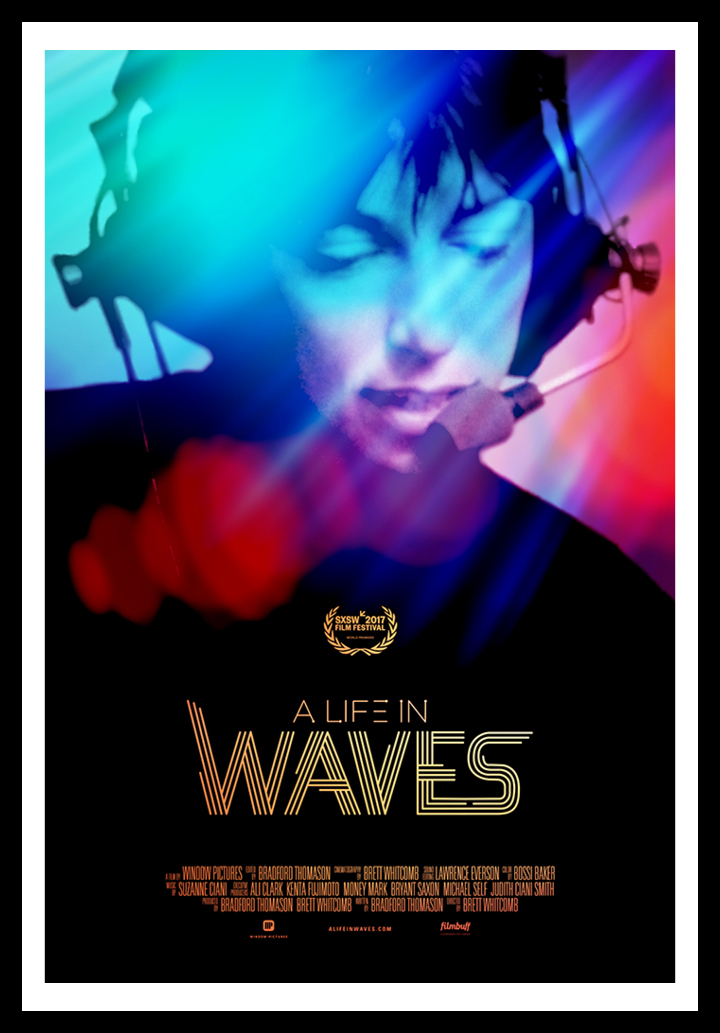 The influence of Suzanne Ciani on electronic music cannot be overstated. In a career littered with innovations, Ciani is a generous and charismatic outsider. She played a key role in introducing the Buchla synthesizer, the unwieldy instrument now beloved by artists like Four Tet and Floating Points, often appearing on chat shows and daytime television to demonstrate oscillations that felt beamed from the future. This upbeat documentary revisits such charming footage, zipping to the modern-day, when, after decades of success as a commercial composer, Ciani basks in a revitalised new underground reverent to her legacy. That’s what chill out is all about. 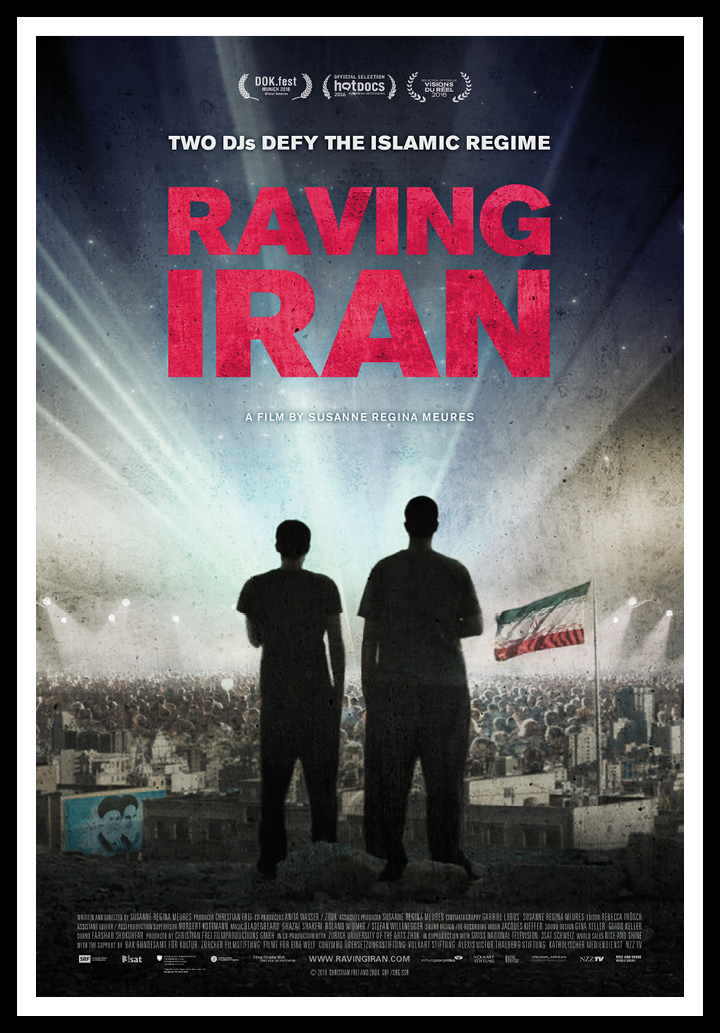 Any club promoter will tell you that throwing parties is no easy business. However, operating as DJs under the oppressive thumb of the Iranian government proves to be another game entirely, as this breakthrough documentary shows. Anoosh Rakizade and Arash Shadram are two best friends and DJs who perform as Blade&Beard and operate well below the radar, throwing parties far-out in the dessert and operating a hardcore network of mixtape distribution that risks seeing them in prison. An inevitable police raid and arrest sees them set their sights on a gig abroad, but when they’re invited to Switzerland, it’s uncertain if they will be able to leave their home country at all. Sweat-inducing and surprisingly amusing, Raving Iran speaks fondly to the political power and personal joy of dance, no matter the conditions. 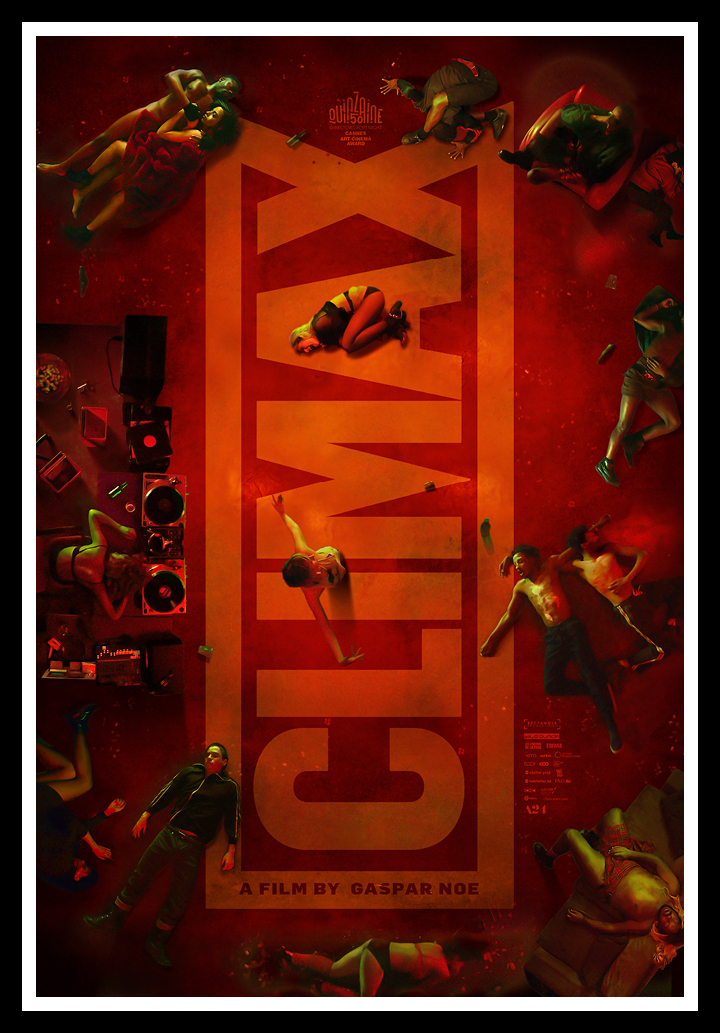 Director and devoted provocateur Gaspar Noé transports a bevy of voguing dancers to a remote community centre and takes them on the worst acid trip imaginable, in his unpleasant and sometimes brilliant fifth feature. While the beatings, bloodshed and horror-psychedelia of the second-half come with a very strong trigger warning, the first forty-five minutes are remarkably joyous. Lead by ballroom icon Kiddy Smile, each dancer demonstrates incredible moves to a blended party mixtape of MARRS, Aphex Twin, Dopplereffekt and more. Exhausting and invigorating in equal measure, Noe’s direction almost begs you to leave your seat and find a dancefloor with immediate effect. Sensitive souls might well heed the opportunity. 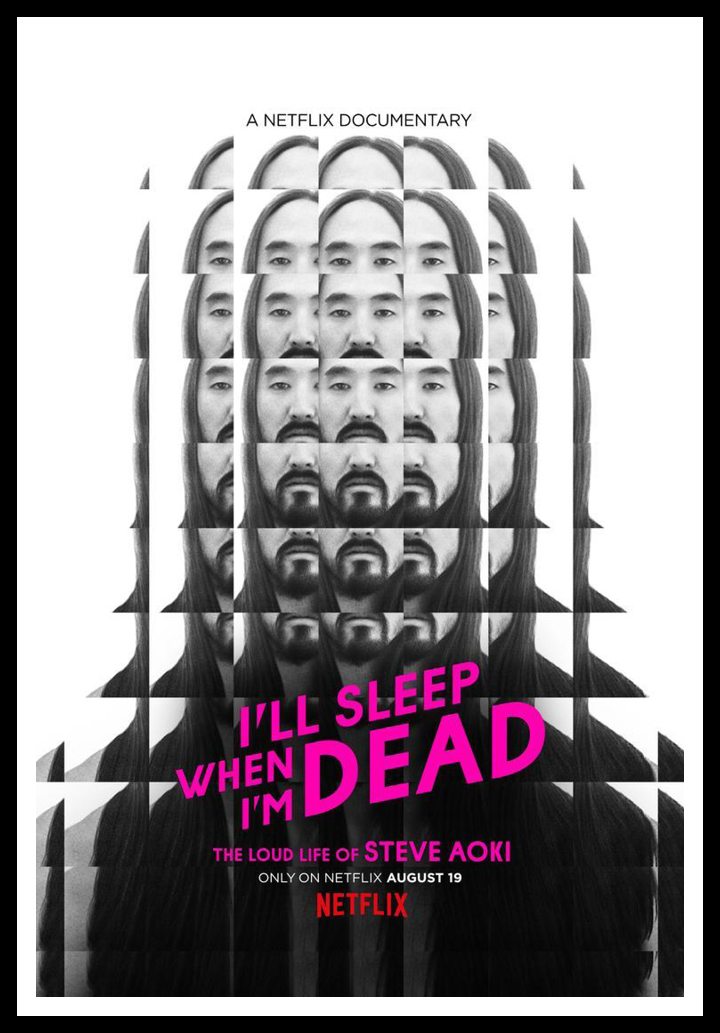 I’ll Sleep When I’m Dead tracks Aoki, the cake hurling enfant terrible of the EDM bubble, across the world as he prepares to unleash a double album and become the first DJ to headline New York’s Madison Square Gardens. Not everything goes to plan, but Aoki wins his fans back by hosting a block party in Los Angeles. “This is punk rock!” he exclaims, shortly after meeting and shaking hands with the city mayor. While the documentary is undoubtedly little more than a very on-brand celebration of Aoki’s sheer persistence, it does provide a sly insight into his ruthless determination to make a scene, earning surprising sympathy when it becomes clear that, like many of us, Aoki is attempting to conquer some serious Dad issues. 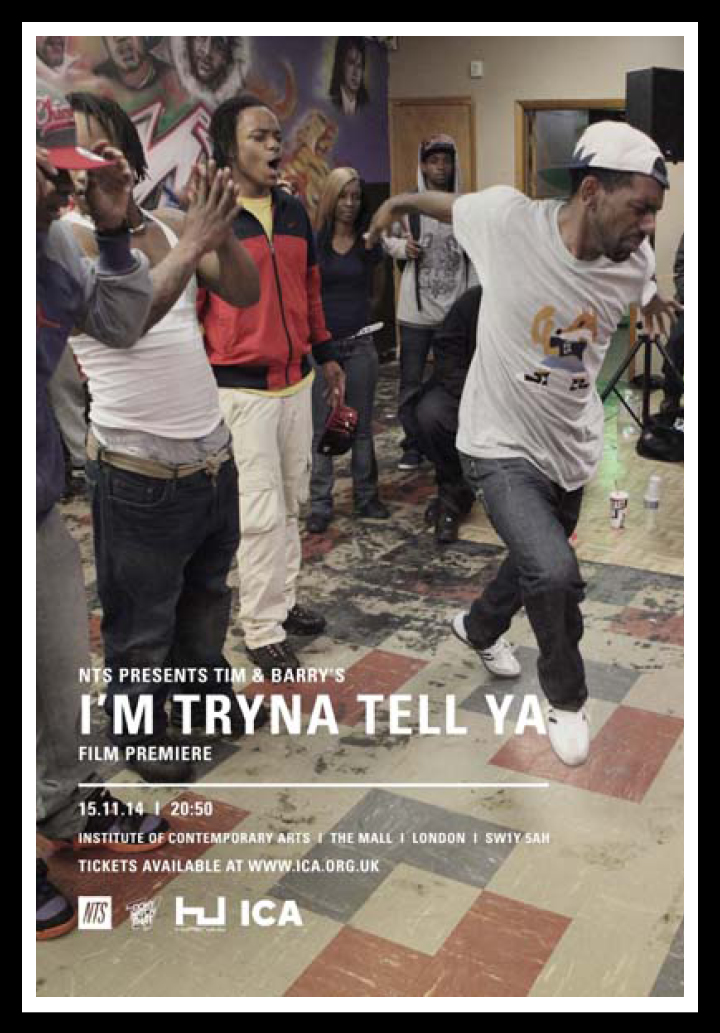 The UK music underground is forever indebted to Tim and Barry of live-stream platform Just Jam, who have been relentlessly documenting rap, grime and raw youth culture since the ’90s. When the pair visited Chicago in 2012, they happened to arrive on the cusp of footwork’s influence on dance music internationally. As in the ends in the UK, they capture moments of collaboration and community with zero pretence, having been invited in by the likes of DJ Spinn, RP Boo and DJ Rashad. The latter’s untimely passing shortly after the film’s release adds an additional poignancy to the vital energy on display, as tempos climb higher and dancers go harder. 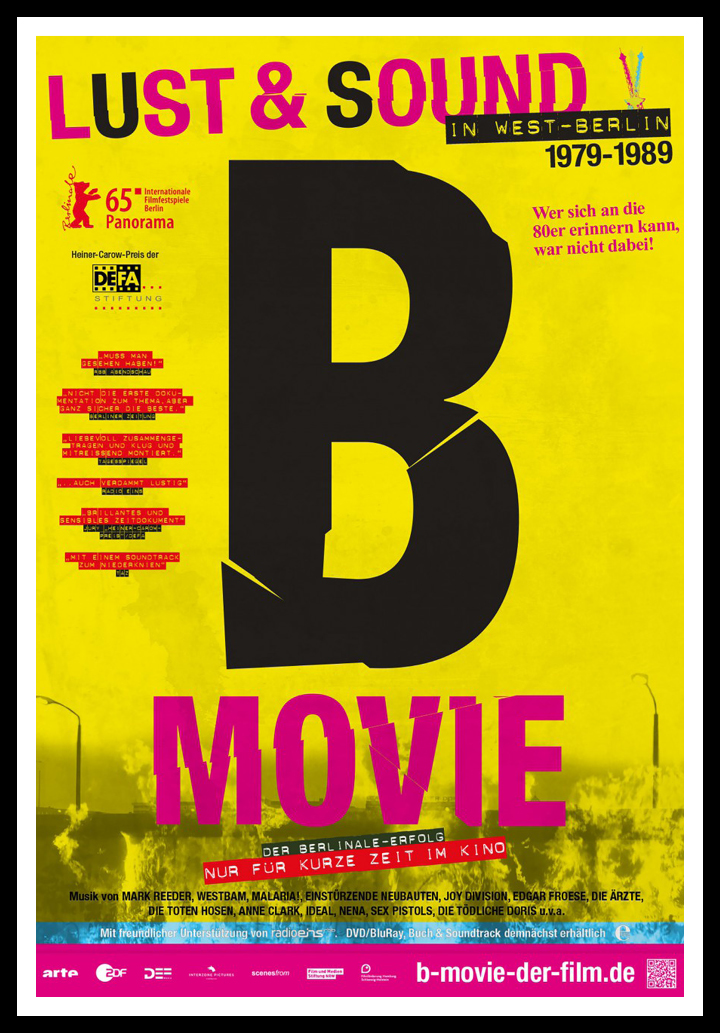 While not explicitly concerning dance culture, B-Movie concludes with the fall of the Berlin Wall, when the futurist rhythm and aesthetic established in techno culture across Detroit and Chicago had found serious favour among young people in Germany, looking to celebrate a new sense of hedonistic freedom. Overflowing with incredible fashion stained by fumes of cigarette smoke, B-Movie’s guide is UK journalist and musician Mark Reeder, an arrival from Manchester who lived amid the relentless new beat of experimentalism and anarchy of Berlin. 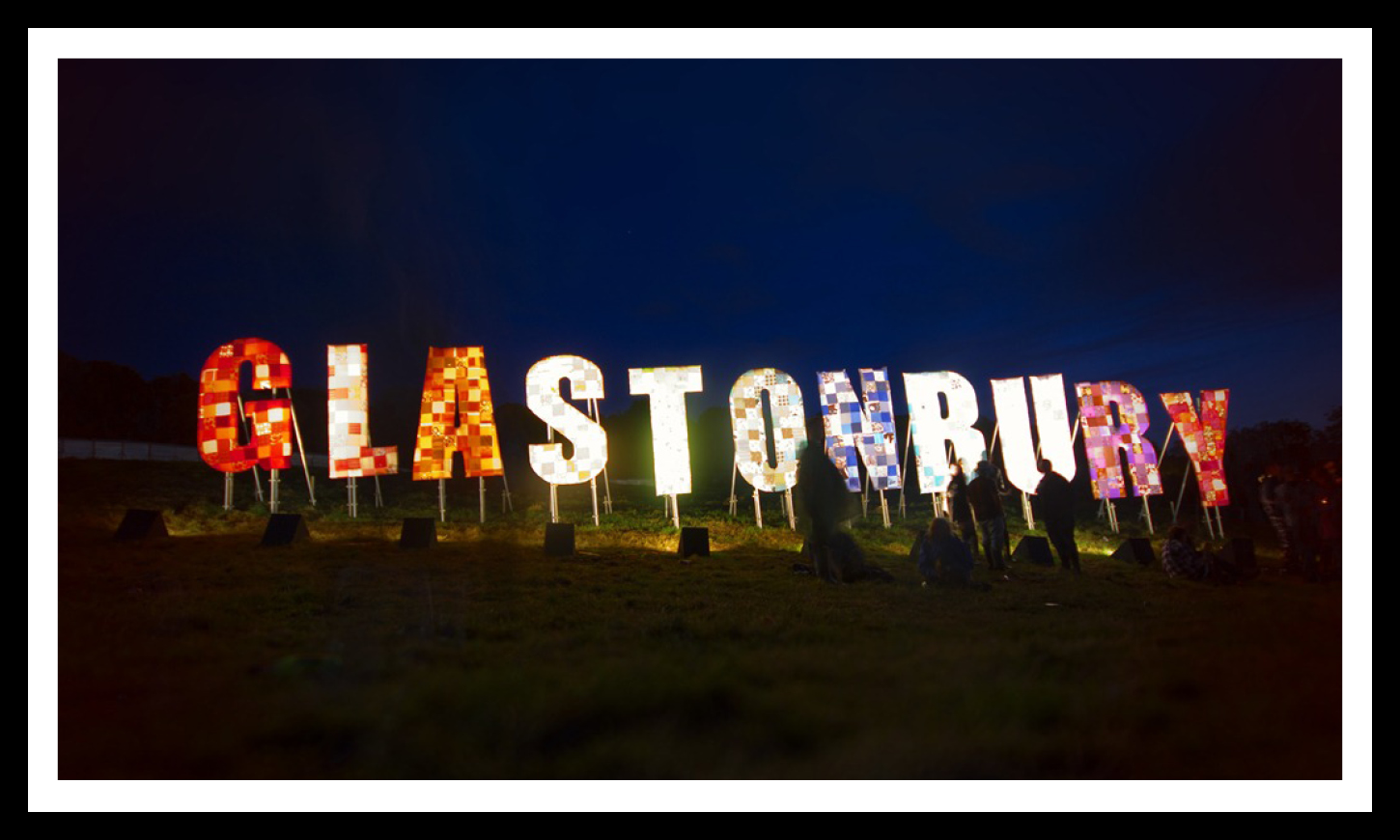 British documentary maker and artist Julien Temple had already made one acclaimed Glastonbury documentary when he returned to the festival in 2012 for Glastopia: Glastonbury After Hours. This time venturing away from the programming of the main stages, Temple creeps with curiosity and caution into the wilder verges of Britain’s weirdest farm, finding the legacy of Glastonbury’s mystical past still alive and somewhat out of it’s mind for four nights straight. Circus acts, drag freedom and good old-fashioned muddy raving all feature, each far removed from Chris Martin’s celebrity holiday cottage. News
Janet Jackson documentary to be released this month